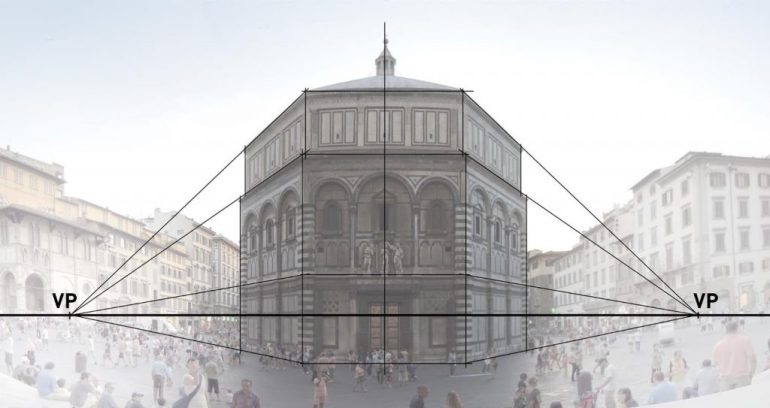 Linear perspective, a system of creating an illusion of depth on a flat surface. All parallel lines (orthogonals) in a painting or drawing using this system converge in a single vanishing point on the composition’s horizon line. 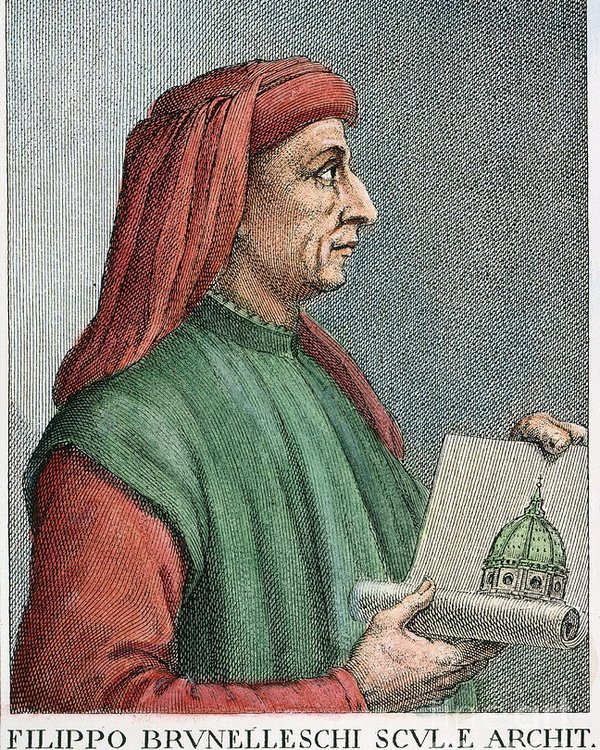 Filippo Brunelleschi (Italian: [fiˈlippo brunelˈleski]; 1377 – April 15, 1446) was an Italian designer and a key figure in architecture, recognized to be the first modern engineer, planner and sole construction supervisor.[4] He was the oldest amongst the founding fathers of the Renaissance.

He is generally well known for developing a technique for linear perspective in art and for building the dome of the Florence Cathedral. Heavily depending on mirrors and geometry, to “reinforce Christian spiritual ‘reality’”, his formulation of linear perspective governed pictorial depiction of space until the late 19th century.[5][6] It also had the most profound – and quite unanticipated – influence on the rise of modern science.[6] His accomplishments also include other architectural works, sculpture, mathematics, engineering, and ship design. His principal surviving works are to be found in Florence, Italy. Unfortunately, his two original linear perspective panels have been lost.

Like most discoveries, perspective theory did not emerge out of a vacuum. The underlying ideas had been accumulating for centuries. While the main application of perspective is in art, it is an optical phenomenon and thus has its principal root not in art but in geometrical optics.
Euclid’s Optica, C. 300 B.C., was the first text on geometrical optics, in which are defined the terms visual ray and visual cone.

Perspective is the method of sketching a front with the sides withdrawing into the background, the lines all meeting in the center of a circle. Unfortunately he didn’t elaborate on that. Elsehere, Vitruvius’ reference to Greek and Roman stage design, implied an understanding of the vanishing point. 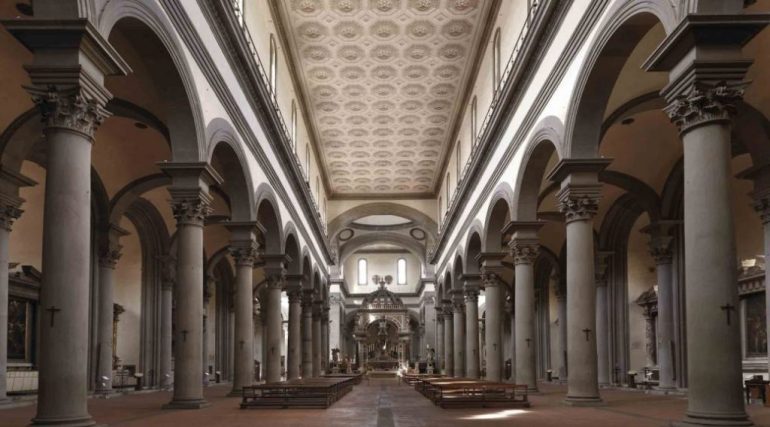 Brunelleschi observed that with a fixed single point of view, parallel lines appear to converge at a single point in the distance. Brunelleschi applied a single vanishing point to a canvas, and discovered a method for calculating depth. In a famous noted experiment, Brunelleschi used mirrors to sketch the Florence baptistry in perfect perspective.

He was able to mathematically calculate the scale of objects within a painting in order to make them appear realistic. It was a monumental discovery, and soon artists were using Brunelleschi’s method of perspective to astonishing affects in their paintings. (img Florencie, Filippo Brunelleschi, San Spirito,1434)

Filippo Brunelleschi’s dome for Santa Maria del Fiore is a feat of engineering so revolutionary that it faced doubters at every step of its realization. 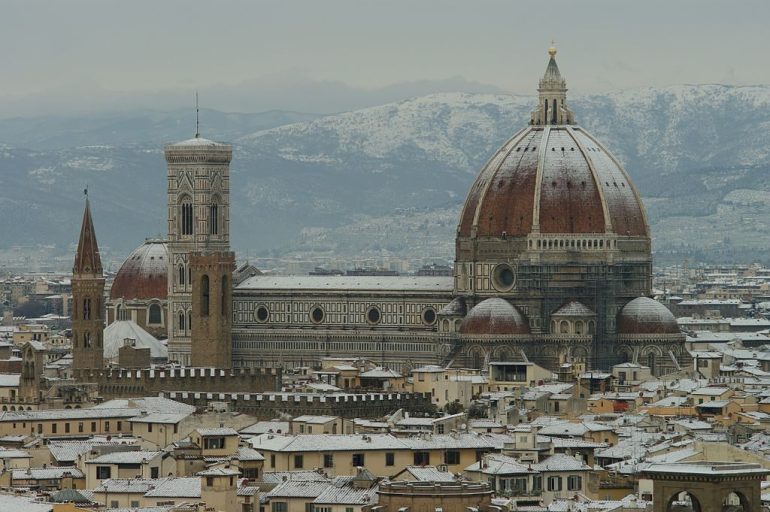 Brunelleschi’s original perspective studies are long gone, but he directly influenced many others. The first known painting to show true linear perspective is Masaccio’s “The Holy Trinity”. In the fresco, a false room has been created on the flat wall of the church using perspective to simulate the architecture.

This website uses cookies to improve your experience while you navigate through the website. Out of these cookies, the cookies that are categorized as necessary are stored on your browser as they are essential for the working of basic functionalities of the website. We also use third-party cookies that help us analyze and understand how you use this website. These cookies will be stored in your browser only with your consent. You also have the option to opt-out of these cookies. But opting out of some of these cookies may have an effect on your browsing experience.
Necessary Always Enabled
Necessary cookies are absolutely essential for the website to function properly. This category only includes cookies that ensures basic functionalities and security features of the website. These cookies do not store any personal information.
Functional
Functional cookies help to perform certain functionalities like sharing the content of the website on social media platforms, collect feedbacks, and other third-party features.
Performance
Performance cookies are used to understand and analyze the key performance indexes of the website which helps in delivering a better user experience for the visitors.
Analytics
Analytical cookies are used to understand how visitors interact with the website. These cookies help provide information on metrics the number of visitors, bounce rate, traffic source, etc.
Advertisement
Advertisement cookies are used to provide visitors with relevant ads and marketing campaigns. These cookies track visitors across websites and collect information to provide customized ads.
Others
Other uncategorized cookies are those that are being analyzed and have not been classified into a category as yet.
SAVE & ACCEPT
Powered by